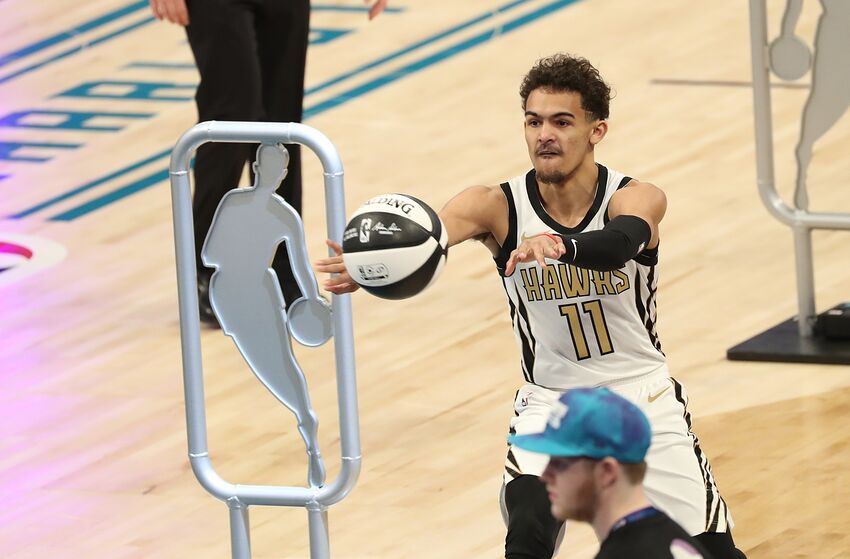 CHARLOTTE, NC - FEBRUARY 16: Trae Young #11 of the Atlanta Hawks participates in the 2019 Taco Bell Skills Challenge as part of State Farm All-Star Saturday Night on February 16, 2019 at the Spectrum Center in Charlotte, North Carolina. NOTE TO USER: User expressly acknowledges and agrees that, by downloading and/or using this photograph, user is consenting to the terms and conditions of the Getty Images License Agreement. Mandatory Copyright Notice: Copyright 2019 NBAE (Photo by Joe Murphy/NBAE via Getty Images)

Looking at Trae Young‘s upcoming repping of the Atlanta Hawks at a busy All-Star weekend.

2nd year point guard Trae Young has been a tour de force this season for the Atlanta Hawks, and the rest of the league is starting to take notice.

The 21-year-old led Eastern Conference guards in the first All-Star voting returns, and now it looks like that weekend just got a bit busier for him.

Chris Haynes of Yahoo Sports revealed that sources indicate both Trae Young and Luka Doncic have received invitations to participate the three-point challenge, while Young has also been invited back to the Skills Competition, which he nearly won last year.

Young also competed in the Rising Stars challenge a year ago, and is him playing in that is almost certainly up to him, as it looks like he’ll be competing in three other events (including the actual game on Sunday) throughout the weekend.

The 3-point contest is very fitting for the deep ball enthusiast, but might not totally be his style (whens the last time you’ve seen Young take a three standing still?). He’s shooting 37% on nearly ten attempts a game from beyond the arch.

The only other potential participant outside of Trae and Luka is Miami’s Duncan Robinson. Last year’s winner was Nets’ guard Joe Harris.

The skills comp displays probably his greatest skills however in passing and ball control. The shifty guard will probably be among the favorites both knowing his skill set and his 2nd place performance a year ago.

Appearing in three events, possibly four with the Rising Stars,  through the All-Star break is a huge win for both Trae Young and the Atlanta Hawks.

It shows the mix of both skills and mainstream popularity the Hawks have been wanting in a star basically since Dominique Wilkins.

Next: 3 Takeaways from Hawks' loss to Denver

As for other Hawks, John Collins likely will not return to the dunk contest, while Kevin Huerter and perhaps De’Andre Hunter have a chance to slip into the Rising Stars challenge, especially if Trae’s roster spot is open.